The world quickly got less safe for immunosuppressed people.

Segev is studying the effectiveness of a third dose, hoping “there’s something we will ultimately be able to do for transplant patients.”

He hopes to soon launch a formal interventional trial, providing a third shot in a clinical setting, where he can ensure safety and track participants’ response.

A handful of patients already have started getting extra shots – simply showing up at vaccination centers and not admitting that they’ve already been vaccinated. It would be far safer, Segev said, for them to get that third dose through a clinical trial. He is now looking for volunteers at transplantvaccine.org.

“It’s really important for this to be out there so people know this is happening,” he said.

Segev hoped that although transplant patients didn’t develop antibodies, they might still have some protection against COVID-19.

Unfortunately, his and other hospitals are starting to admit transplant patients who contracted COVID-19 after being fully vaccinated. “That’s almost unheard of in the general population,” he said. “We’re seeing this at a much higher rate in transplantation.”

Segev, who recently examined 30 patients who’d had a third shot, said there were no safety issues except in one person who had a low-grade rejection event a week after the final dose. But that problem might have started before the shot. “We don’t see a strong signal for it now,” he said about possible rejection.

Segev also will look at whether transplant patients who failed to develop a response after two doses of mRNA vaccines – made by Pfizer-BioNTech and Moderna – will fare any better after a booster. (His earlier research suggested that the single J&J vaccine was even less protective for transplant patients than the two-shot vaccines.)

Data can’t come in fast enough for people who are worried vaccines may not keep them safe, Montgomery said.

“This is the No.1 problem in our field right now,” he said.

Luckily, most other immunocompromised people will get better protection than transplant patients, experts say.

Vaccines appear to be just as safe for them, and most seem to get at least some protection.

The problem is, it’s impossible at this point to know how safe someone is. For the general population, which is more than 90% protected by the vaccines, there’s no need to worry, experts said.

For people who are immunocompromised, there’s no good way to tell if they’re protected. Antibody tests, which look for some types of protective antibodies, may not tell the whole story and are only a snapshot in time, said Dr. Gil Melmed, who directs inflammatory bowel disease clinical research at Cedars-Sinai Medical Center in Los Angeles. The CDC has discouraged people from using the tests.

In everyone, antibodies are likely to decline over time, and it’s not clear what level is protective.

Vaccines also generate T cells, often called the soldiers of the immune system, which seem to provide longer-term protection, but there are no commercially available tests to look for them.

To ensure they are safe, people who are immunocompromised should “build a wall of protection” around themselves, by getting vaccinated and making sure everyone around them also is vaccinated said Dr. Rajesh Gandhi, an infectious disease specialist at Massachusetts General Hospital.

“I don’t think we’re quite ready to throw caution to the wind,” added Dr. Joshua Katz, a neurologist at the Tufts University School of Medicine, also in Boston. He recommends his patients continue to take precautions like masking, and ensuring that people around them are vaccinated.

Dr. Samir Parekh, a multiple myeloma specialist at The Tisch Cancer Institute at Mount Sinai in New York, says immunocompromised patients should talk with their doctor about using accurate antibody testing to identify if they’re at particular risk. “We are recommending testing for our myeloma patients who have immune suppression from their cancer as well as chemotherapy treatments,” he said.

For patients with irritable bowel syndrome, vaccines appear to be safe and to provide about 80% protection, which is lower than for totally healthy people but still good, Melmed said.

He runs a registry tracking 1,800 inflammatory bowel disease patients to understand how they react to vaccination. He said it’s too soon to know if IBD patients are getting more “breakthrough infections” after vaccination than the general population, but he hasn’t seen worse outcomes among his registry members.

Melmed hopes the registry will help teach researchers vaccine protection wanes over time, and whether it fades faster in people, like his IBD patients, who are immunocompromised.

Multiple sclerosis patients have been on a “roller coaster ride” for the past year, Katz said, with worries and fears about COVID-19. It turns out they are not an increased risk for catching COVID-19, he said, and vaccination poses no extra risk for someone with the disease.

The National Multiple Sclerosis Society encourages everyone with MS to get vaccinated against COVID-19. 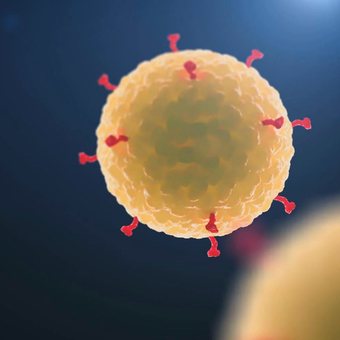 Whether vaccination is effective in MS patients seems to depend on which treatment they are on out of the 16-17 available, Katz said. Most people on the drug Mavenclad (cladribine), for instance, were well protected by COVID-19 vaccines, while only about 20% of those on Gilenya (fingolimod) and Ocrevus (ocrelizumab) made antibodies, he said.

Yet in a study of Ocrevus, even those who didn’t make antibodies still made extra white blood cells after vaccination, suggesting they got some protection, he said.

For cancer patients, the amount of protection varies by cancer type and where they are in their treatment.

About 98% of people with solid tumors developed protective antibodies after vaccination, according to one study published this month in the journal Cancer Cell. By comparison, only 85% of blood cancer patients and about 70% of those on strong immune system therapies developed antibodies.

People should get vaccinated before starting chemotherapy if possible, said Dr. John Zaia, who directs the Center for Gene Therapy at City of Hope, which runs cancer centers in California. If that’s not possible, they should delay vaccination until the end of their chemotherapy treatments to get the best response to the shots, he said.

Zaia is leading research into a COVID-19 vaccine developed at City of Hope specifically for cancer patients, using a platform designed for bone marrow transplant patients who lose protection from all vaccines during their transplant. Zaia said he has tested the vaccine so far in 60 healthy people and will next compare its effectiveness against the Pfizer-BioNTech vaccine.

If cancer patients do catch COVID-19, they should consider getting monoclonal antibodies, drugs that help reduce the chances of a severe case of the disease, said Dr. Craig Bunnell, chief medical officer and a breast cancer specialist at the Dana-Farber Cancer Institute in Boston.

The same drugs may prove effective at preventing infection in people, like cancer patients, who can’t get protection from vaccines, he added. Studies to confirm this are underway.

Unfortunately, Nadeem-Baker belongs to the group with the least protection from vaccines and the highest risk for catching COVID-19.

The CDC’s decision last month to lift the mask recommendation for those who had been vaccinated made her life worse. Even the unvaccinated took off their masks.

“I want to go back to living normally, just like everyone else,” she said. “I feel like I’m outside of life looking in.”